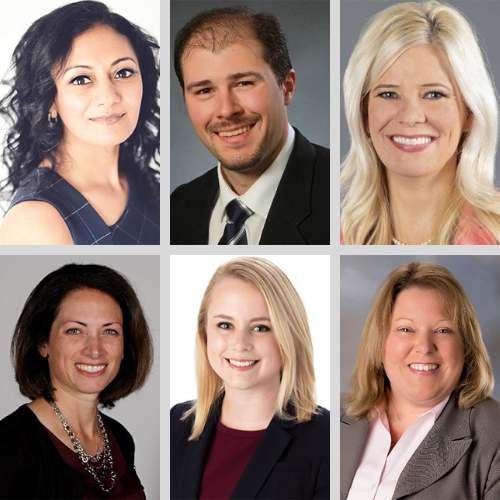 Girl Scouts in the Heart of Pennsylvania is excited to welcome six new members to the following GSHPA Committees: Board Development, Fund Development, Property, and Strategic Planning.

“I am confident that with this robust group of professionals joining our organization and serving on their respective committees, that Girl Scouts in the Heart of Pennsylvania will continue to gain momentum to drive our mission of building girls of courage, confidence and character,” said Janet Donovan, GSHPA President and CEO.

The committee members work closely with the GHSPA Board of Directors and council leadership.

Liz DiLullo Brown of Union County was named Little League Senior Vice President and Chief Marketing Officer in November 2018. Liz joined Little League International in 2009 and since then has been leading the Marketing and Communication departments. She has been instrumental in growing relationships with Major League Baseball, strategic planning, branding, and digital promotion. She is the first female employee at Little League International to hold the Senior Vice President title.

In 2015, she was named a Sports Business Journal Game Changer Honoree, recognizing the accomplishments of women in the sports business.

In addition to her work for Little League International, Mrs. Brown is also a Little League mom and local league volunteer at Lewisburg (Pa.) Little League. She and her husband reside in Lewisburg with their two children.

Cody C. Cogan, M.S., P.E. of Centre County is the Managing Principal and co-founder of Endeavor Professional Services, LLC and is responsible for all day to day operations. Cody has worked with a diverse group of operators and has successfully navigated the regulatory and design requirements for over 250 project sites.

Prior to co-founding Endeavor, Cody began his career as a research analyst with the U.S. Environmental Protection Agency. He was later retained by Herbert, Rowland and Grubic, Inc. where he oversaw all aspects of the Oil and Gas practice group. He is an avid outdoorsman and a founding chapter chairman of the Keystone Elk County Alliance. He also takes on NCAA baseball umpire assignments in Pennsylvania and New York.

Liz Dellinger of York County is the Director of Treasury Management at Traditions Bank, holds a degree from the University of Delaware, and is a GSHPA Girls Scout Troop Leader.  Liz has served on various community organization boards including YWCA of York, York County Community Foundation (YCCF), York County Chamber of Commerce, Lutheran Social Services of South Central Pennsylvania, and the York County Economic Alliance.

Liz was a founding member of ALLIANCE fuel, the first recipient of their Ignite Award, and was honored as a York’s ATHENA Award Winner. In addition, she was chosen as a Women of Influence honoree by the Central Penn Business Journal in 2019.

Sarah Doyle of York County is an attorney with Stock and Leader Attorneys at Law and a member of the firm’s Business, Municipal, and Agricultural Industry Groups, with a focus on employment and litigation matters.

Raised on her family’s farm in Red Lion, York County, she received a B.S. in Animal Sciences from The Pennsylvania State University. She then earned her Juris Doctorate from The Pennsylvania State University Dickinson School of Law, where she held office as President of the Agricultural Law Society and was a member and coach of Penn State Law’s Environmental Law Moot Court Team.

Tena Maurer of Schuylkill County was introduced to Girl Scouts as a Brownie. As an adult, she has been a troop leader for both Daisy and Brownie troops and has enjoyed sharing her love for Girl Scouts with her daughter. Some of her most memorable experiences with her troops have been getting to spend weekends at Camp Small Valley and traveling to Washington D.C. in 2012 to Rock the Mall where she and her troop along with 250,000 other Girl Scouts celebrated 100 years of Girl Scouts.

Tena earned her undergraduate degree from Pennsylvania State University in Business Management and a Master’s degree in Human Resources Management from Saint Francis University.  She and her husband have three children. Their family enjoys volunteering, spending time in the outdoors, camping with their RV, and supporting the kids at their sporting events.

Ami Zumkhawala-Cook of Cumberland County serves as the Director of Operations and Program Development at the Penn State Health Children's Hospital. With more than 20 years in hospital administration, Ami previously served as the Administrative Director of Hospital Operations at Geisinger Holy Spirit Health in Camp Hill. There, she served as a senior leader directing strategic initiatives and business collaborations.

Ami is active in civic affairs throughout Central Pennsylvania and currently serves as the Camp Hill Borough Appointed Trustee of The Cleve J. Fredricksen Library. She serves on the Executive Committee and Board of Leadership Harrisburg Area. She is a graduate of Leadership Harrisburg Area’s Executive Leadership Series Class of 2013 and served two terms on the board of Leadership Cumberland. Ami earned a Bachelor of Philosophy degree with concentration in biomedical ethics from Miami University (Oxford, Ohio) and earned two Master’s degrees from Xavier University (Cincinnati, Ohio) in Business Administration in Health Services Administration.